“You’re not supposed to talk to us,” said one of the police offiers protecting the set-up of the London arms fair from nonviolent protesters last week.

For a moment, I was confused. While I’ve often been ignored by police, I’d never been explicitly told be police not to talk to them.

Then I realised what he meant. When legal advice was read out by protest organisers every morning to the protesters outside the arms fair, it included the advice, “Don’t talk to the police”.

This is not advice that I choose to follow. This is not due to naivety: I am careful about what I say to the police and I don’t give away personal information (this is, I think, what the advice is aiming at). However, I don’t like the idea of not talking to someone, and I also believe in challenging the police about some of their actions, while following the longstanding Christian pacifist principle of distinguishing between the person and their actions.

I did not, sadly, get time to explain this to the policeman in question. He had heard us being advised not to speak to the police at all and he assumed therefore that this was something that we would do. He has to do what his superior offices tell him and he seemed to have been expecting us to operate on the same basis.

The difference is that we did not have superior offices. We did not have orders. We had advice, that could be accepted or rejected.

The protests over last week caused significant disruption to the set-up of the London arms fair, known euphemistically as Defence & Security Equipment International (DSEI). Over 100 people have been arrested in the nine days since the protests began for carrying out nonivolent direct action. This involved a great deal of organisation on the part of some of the groups involved, and spontaneous decisions in the case of others. But it didn’t require anybody to give orders, do things they did not believe in or fit into hierarchical structures. The police officer who talked about what we were “supposed” to do may have difficulty understanding this. 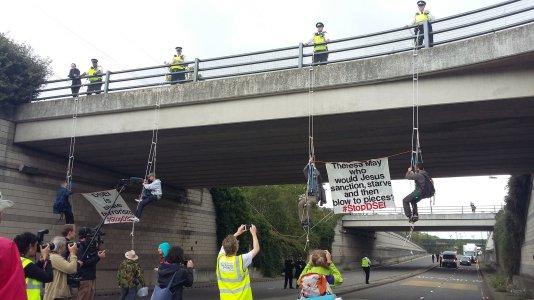 Most people (myself included) are far too ready to do what we are told. Of course, in some emergency situations, this may be the right thing to do: a surgeon who is operating on someone needs to make quick decisions about the equipment needed and their collleagues need to respond speedily when asked to pass something. At other times, what we are told to do may be the right thing to do anyway, or we may choose to go along with a collective democractic decision out of commitment to the group involved and its processes.

However, doing what we are told simply because it’s what we are told is nearly always a mistake. Most injustices involve large numbers of people. A dictator can only be a dictator because their troops fire when ordered to do so and the media print what the dictator wants people to hear. Of course it is unimaginably difficult for one soldier or journalist to stand up to a dictator single-handedly – and I’m certainly not judging them for failing to do so. But when large numbers of people withdraw co-operation from a government, it cannot function. A dictator whose troops refuse to fire becomes no longer a dictator, turning in a matter of minutes into a powerless person in a palace.

The Daily Mail has today effectively devoted its front page to attacking the principle of nonviolent civil disobedience. The headline suggests that Len McLuskey has compared himself to Nelson Mandela. He has, of course, done no such thing. Rather, he has defended the right of people to break unjust laws, including the Tories’ new laws restricting strikes. While I’m often very critical of McLuskey – not least for his support of the arms industry – I completely agree with him on this issue.

The Mail quotes McLuskey saying that Gandhi, Mandela and the suffragettes were all attacked for breaking the law. Indeed, they were all attacked by the Daily Mail for breaking the law. The paper described Christabel Pankhurst as the “most dangerous woman in Britain”, before she abandoned the suffrage struggle to back the army recruitment drive in World War One, after which the Mail loved her.

By saying it’s wrong for illegal strikers to compare their struggles to these historical ones, the Mail is implying that these struggles were praiseworthy and justified. It’s not the first time the Mail has conveniently forgotten that it’s been consistently on the wrong side of history and that most of the positions it’s backed have been firmly defeated.

There are plenty of respectable people who back civil disobedience – as long as it’s safely in the past. I once heard a Tory peer saying how much she would have supported the suffragettes. She was not, of course, backing any civil disobedience in the present.

Police line the route to the arms fair to stop peaceful protesters getting on to the road.

Despite all the arrests last week, despite the police’s facilitation of the violence of the arms fair and the obscene sight of mounted police breaking up a Quaker Meeting for worship in the road, I freely acknowledge that we have far more rights to protest in Britain than in certain other countries (not as much freedom as we should have, but still a lot more than some). What rights and freedoms we do have, we have because our ancestors campaigned for them, and because we continue to assert them. They were not graciously handed down to us by the rich and powerful.

All worthwhile political change happens from the ground up. If people always did as they were told, we would have gained no rights at all. All large-scale injustice relies on people doing what they are told. To overcome injustice, therefore, we need to stop doing what we are told.