On 27th April 1945, three people were sent to prison in the UK for their distribution of leaflets and newspapers opposing the war. In effect, they were political prisoners, locked up for expressing their opinions.

Incidents such as this don’t get talked about very often. They undermine all the claims about how the war was fought for freedom and democracy.

Philip Sansom, Vernon Richards and John Hewetson spent nine months in prison. The war was over by the time they were released.

Technically, they were convicted of conspiracy to engage in “incitement to disaffection”: that is, encouraging armed forces personnel to question or disobey their orders. Their publications, in particularly the anti-war anarchist newspaper War Commentary, had been sent to a small number of members of the armed forces. Most if not all of these recipients seem to have been people who had chosen to subscribe to the paper, but this didn’t stop the court convicting them. 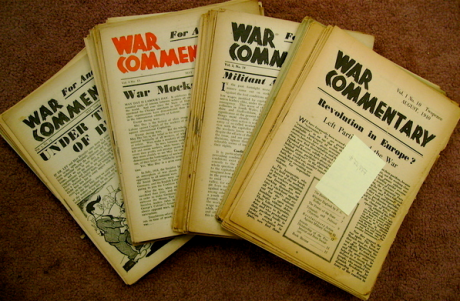 The three writers were tried alongside another contributor to War Commentary, Marie-Louise Berneri. She was found Not Guilty on an obscure (and sexist) legal technicality: she was married to Vernon Richards and the law on conspiracy specified that a husband and wife could not be guilty of conspiring together. This at least allowed her to keep War Commentary running while the others were in prison.

Democracy and free expression are often among the first casualties of war and militarism. It would of course be absurd and offensive to suggest that the imprisonment of British activists was in any way on a level with the horrors of the Nazi regime, or the Stalinist government of the Soviet Union. The four defendants strongly opposed Nazism and Fascism and did not believe that the rulers of the Allied powers were motivated by a concern for democracy. Ironically, the state proved their point by imprisoning them for saying so.

A common feature of militarism is the assumption that soldiers should have fewer rights than civilians: they should not be allowed to hear anti-war views. Those who sent them anti-war publications were imprisoned. As Philip Sansom later put it, “Soldiers are not supposed to think and it is a criminal offence to encourage them to do so”.

This is one of the paradoxes of militarism: cheerleaders for war like to talk of respecting the armed forces, but in practice they take away the rights of military personnel, while pacifists and other anti-militarists uphold them.

I know I would have disagreed with all four of the defendants on several issues. This does not stop me supporting their right to speak out, and the right of both civilians and military personnel to hear them.